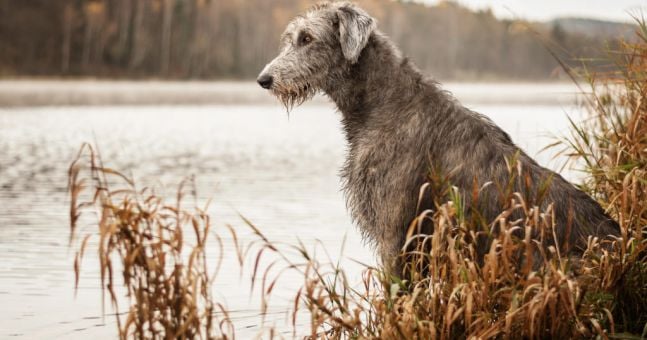 TODAY IS National Puppy Day – well, a day we can all celebrate our love of dogs!

Ireland is a country full of animal lovers, from those who volunteer for rescues to the thousands who adopt once abandoned puppies to give them new life, to the hundreds of thousands who treat all animals with kindness.

Today, March 23 is National Puppy Day, and to celebrate, we’re going to take a look at the magnificent native breeds of Ireland.

Everyone knows the Irish Wolfhound, but there are a total of nine native Irish dogs, each just as beautiful as the next.

Arguably the most famous native Irish breed, the Irish Wolfhound is a historic greyhound breed once used by the ancient Irish to hunt wolves. Known for his enormous size, averaging 32 inches in height, Wolfhounds have inspired poetry and myths.

Today’s Irish Wolfhound is not the same one that offered protection from wolves a thousand years ago – this breed is said to have gone extinct, but was recreated by breeders in the 19th century.

Three Irish Wolfhound puppies together in the garden

A favorite of families in Ireland due to their docile and loyal nature, the Irish Red Setter is also one of Ireland’s most famous dog breeds. It is also the iconic logo of the Irish national bus service Bus Éireann.

The uniquely-looking, medium-sized Irish Water Spaniel is a great companion for those with an active lifestyle, but their boundless energy and ‘stubborn streak’ means they might not be suitable for novice owners. !

The Irish Soft-Coated Wheaten Terrier is believed to have been around for over 200 years, but was not officially recognized by the Irish Kennel Club until 1937. It owes its name to its soft, silky coat, which, although that beautiful, requires a parcel grooming – something to keep in mind if you are considering adopting one of these beauties.

The Irish Red and White Setter

Irish red and white setter walking in the field

Less well known than the iconic Irish Red Setter, the Irish Red and White Setter is actually believed to have come first – it was through extensive breeding that allowed the development of the solid red color.

In fact, the Red Setter became so popular that the Irish Red and White Setters nearly died out, before being revived thanks to the efforts of the 1920s.

The Glen of Imaal Irish Terrier

The Glen of Imaal Terrier, also known as the Wicklow Terrier, has an interesting history. It is believed to have started during the reign of British Queen Elizabeth I, who hired French mercenaries to quell a rebellion in Ireland in the 1500s. The French brought their low-slung dogs, which bred with Irish terriers. , which resulted in the Glen of Imaal Terrier.

These intelligent, hardworking dogs were first established in County Kerry, where they became extremely popular as raters and for their ability to herd sheep and cattle.

The Kerry Beagle, despite its name, is not to be confused with the average Beagle – the two have very little in common.

Kerry Beagles are medium sized hunting dogs that have a strong hunting instinct and require a large amount of exercise due to their unlimited energy. Despite this, dogs make great pets because they are patient with children and get along well with other dogs.