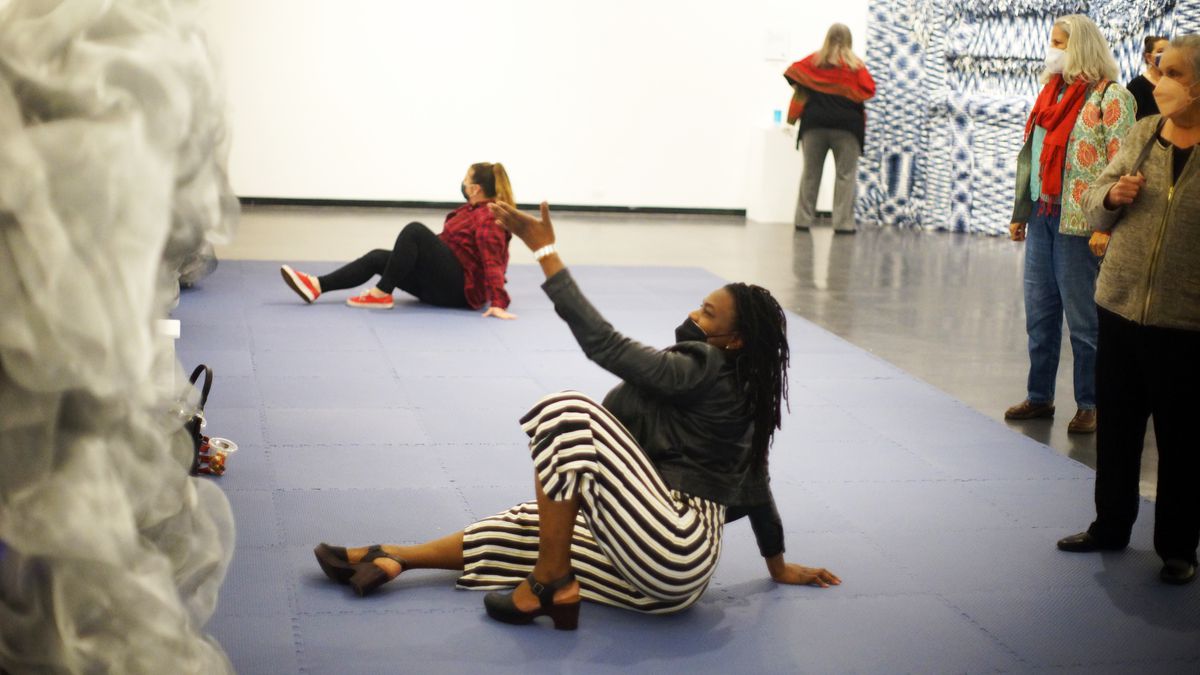 LARGO — Contrary to any behavior in a gallery, the “Look Touch Move” exhibition at the Creative Pinellas Gallery invites visitors to touch art.

Going even further, people are free to dance or get down in the collaborative exhibition. It combines Sharon McCaman’s ‘Reiteration’ interactive installations with ‘Reprise’, dancer and Creative Pinellas-winning artist Helen French, a new work she choreographed through a series of open rehearsals and workshops in the gallery. . The first performance of “Reprise” takes place in the gallery on March 10.

McCaman and French have been friends since childhood and share a dance background. Their intention was to create a space where people would engage with the exhibition by touch and movement, hence the title “Look Touch Move”.

“Reiteration” is made up of five installations that use a mix of textures, materials and technologies to create multi-sensory experiences. McCaman has been interested in technology since she was young, and she combines this with her passion for dancing. QR codes are displayed around the exhibit that lead viewers to looktouchmove.com for more information on the pieces.

Three of the installations are in their third iteration.

SWASH is a soft knitted sculpture with instructions for “touching with a soft hand” above. To the touch, the soothing sound of lapping water is heard, as if swimming. McCaman uses the combined technology of Piezo sensors, an Arduino Mega mini-controller, a Mac Mini and computer speakers, plus velvety yarn.

At first glance, the framed aluminum forms that make up Nebulous are cool on their own. But step onto the foam floor beneath them, and they sparkle with LED lights, becoming deliciously celestial. Pressure sensors under the mat create the magical pleasure of lighting them up as you move.

Pass under pneumaa suspended sculpture in tulle illuminated by light projectors, and feel transported into a dreamlike world.

Are you planning your weekend?

Subscribe to our free newsletter Top 5 things to do

Every Thursday, we’ll give you ideas for going out, staying at home or spending time outdoors.

You are all registered!

Want more of our free weekly newsletters in your inbox? Let’s start.

Explore all your options

MOVE, a collection of short dance films projected on screens, was produced specifically for this exhibition and the space. McCaman, French, Erin Celeste Grace, Heidi Brewer and Jessica Obiedzinski were filmed in space, each dancing alone, improvising their moves. Scan a QR code to access a playlist that eerily accompanies the moves, despite the dancers moving to entirely different music. McCaman has made dance films in the past, which she says were among her earliest integrations of dance and technology. The dance becomes bewitching, with or without music.

The tree is also a new installation, but plays with the concept of reiteration by using a recycled table for its base. McCaman received a large amount of fabric but was unsure what would become of it. While waiting for the material to “speak” to him, French offered him a diverted rubber material that became earth or sand. The result is a life-size installation, with leaves and branches cut, twisted and braided by McCaman and the “wonderful village of human beings” who assisted her.

Surrounding planters The tree, filled with “earth”. Guests are invited to write down what touches or moves them or what they are looking for, place them in pods and “plant” them in the ground. They are frequently removed and some of the used paper can be planted, as it turns into seeds.

McCaman created miniature pieces of SWASH, Nebulous and The tree available for sale, as well as all facilities except MOVE.

On opening night, French performed a piece around The tree. It was sublime.

Throughout the exhibition, French held open rehearsals and workshops in the gallery, exploring the relationship between dance and McCaman’s work. This invites the guests to witness the process of the dance and understand it better. This work will culminate with a performance from 6 to 8 p.m. on March 10 titled “Reprise,” which uses pieces she has choreographed throughout her career. McCaman and two other dancers, Kaylee Davis and Sarah Emery, will perform with French.

“I really feel like they’re consciously saying it’s a medium and a form that sometimes doesn’t get the exposure they might get or the support, and I think that’s because that our support is different,” she said. “The space requirements are different. Creative Pinellas really backed, like, what do you want? How do you want to put this dance in this space?

McCaman said that because she and French have worked together for so many years, they’ll probably use messages from The tree to create more art. They both agreed that the exhibit illustrates how people can bring together creative ideas born of mutual respect.

If you are going to